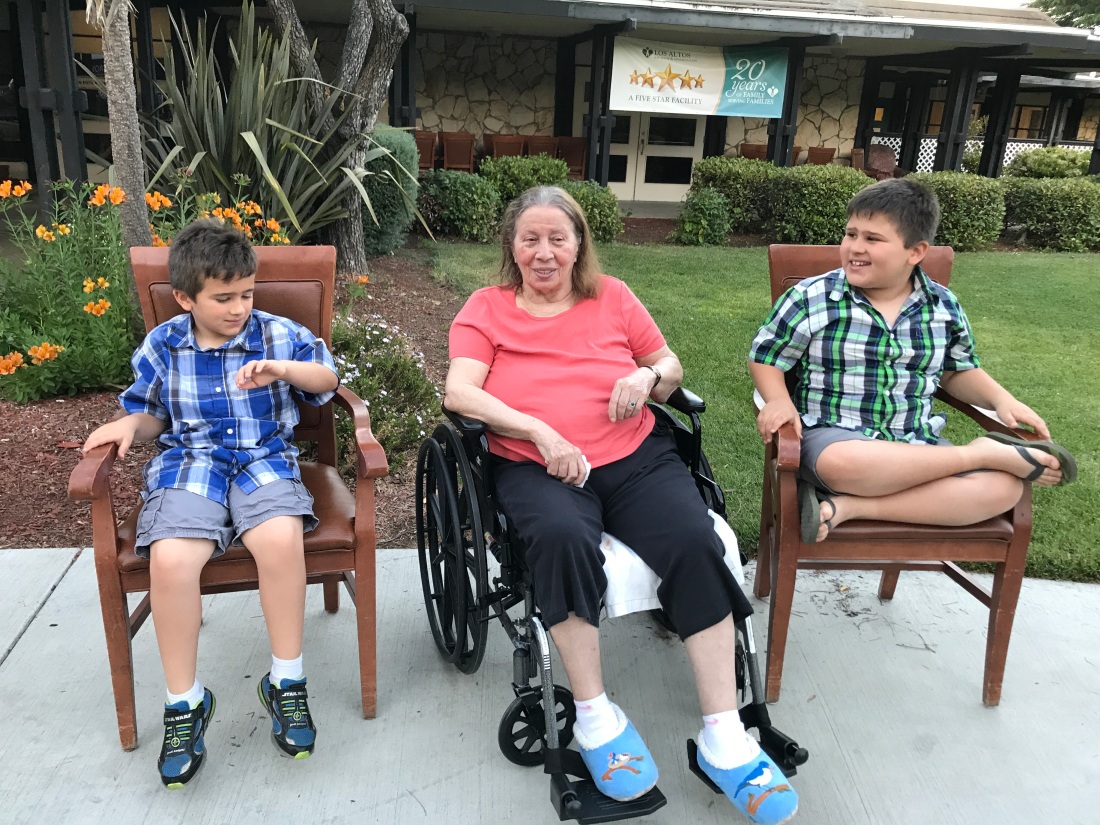 Maryam woke me up this morning crying. “I want my mommy,” she wimpered. Last night her mom died after suffering a stroke on Monday.

There is nothing worse than not being able to do something about someone else’s pain. Mahin Ayatollahzadeh, Maryam’s mom, was always on my side and she was quite a special woman and I’m not saying that just because she was always on my side, even when I brought pain to the family.

Instead, listen to one of her doctors, who worked with her for six years after she couldn’t walk anymore due to an earlier brain tumor: “she was my nicest patient.”

I saw that up and close myself. Despite being dealt a harsh penalty by life (not being able to walk) she never had a harsh word. I never saw her angry. If she had disappointments it was that she couldn’t spend more time with her family.

Earlier in our marriage we had her live with us. Some of my friends joked around about that, saying they never would put up with their mother-in-law living with them. I never saw it as a bother because she was always so nice, not to mention she made the best meals I’ve ever had in my life (and I’ve eaten at some of the most famous restaurants with the most famous chefs, like Guy Savoy in Paris, and I’d trade all those for one of hers).

Her outlook on life came from harsh circumstances. As a woman she came from a society, Iran, where women were treated far harsher than here. She was married at 16 to someone her parents picked for her. Her country went through a devastating war, her home was bombed, she sent Maryam, my wife, away to a far-away land, America, when Maryam was 14.

But for me, I won’t remember her for all of her suffering, but for the smile she always had whenever I saw her, and for the endearing love of her children (and their love for her, her four kids made sure that she got a visit in the convalescent home every single day for six years which made an impression on me about what family actually should mean and that example always caused shame in my heart because I wasn’t behaving the same way toward my family, nor myself).

I’ve been praying this year and said a special one this morning. I’ll miss her.

So Magic Leap has uncloaked. Rolling Stone has the best look at the technology so far. Those I look up to in the industry who have seen it, from friends to people like investor Benedict Evans, who works at A16, are mostly excited. Benedict has been tweeting about his excitement for some time, and repeats that here in a comparison to HoloLens.

10x. No field of view issue. Much higher res. Much better controls. DEPTH OF FIELD.

Yes, there’s lots we don’t know. Price? Expected to be $1,000 to $2,000 (I’m hearing they are trying to get it below $1,000 to appeal to consumers, but the developer version, which is what was announced today, might be higher). Quantities? Unknown, but I love that if you fill out the form on the Magic Leap Website, you’ll notice that it asks if you are a developer, just interested, or a reporter. I suggest that they will take the developers more seriously, at least at first.

Which gets me to my analysis: will this be successful?

I’m both skeptical and optimistic.

1. The market isn’t ready. Quick, explain to me why we need augmented reality glasses (or, let’s go with the term that Magic Leap’s founder uses, “spatial computing”). I know, but then I already have a pair of Microsoft’s HoloLens and I already have several VR headsets. The lack of real success in VR (the best headsets have sold in low millions) shows that the market doesn’t get why we need a new computing platform.

2. Industry FUD. Fear, Uncertainty, and Doubt. We use that term to explain what happens when bigger competitors announce products and get you to wait on your purchase. Microsoft already announced that its next HoloLens will come in 2019. That, alone, will get many to wait. Apple did the same, too, and has 1,200 engineers working on its Magic Leap competitor in Israel.

3. Lack of use cases. I’ve been touring the world this year talking with music industry people, with banking people, with automakers, and others. Magic Leap isn’t yet being taken seriously. Why? Because it hasn’t sold a single product yet. Will it get there? Maybe, but for now the industry is skeptical and, unless Magic Leap is paying for development, most are ignoring. Can that change? Yes, but that gets me to point four.

4. Even if it’s wildly successful it probably won’t make a real dent in marketshare in the industry. Let’s look at VR. HTC Vive is an amazing product but only sold about a million. Let’s say Magic Leap is 20x more successful. That’s 20 million headsets sold. Drop in the bucket. Apple could sell that many in its first month. Back to FUD. And chances that it’ll sell 20x more than HTC Vive? Possible, but not probable. Why? Well, there are a million early adopters who’ll buy for sure. I’ll be one. But to get to everyday people? You need brand, stores, and make a product that’s safe to buy, er, necessary to buy. We’re a long way from all that and I believe it’ll take many billions to build all that from a standing start. Even if it does exceed all expectations (many of my friends who’ve seen it believe it will) it will face huge, entrenched competitors within three years (Apple, Google, Facebook, Snap, Amazon, and a bunch of Chinese companies are all gearing up their own efforts and, most are spending billions in getting their products ready to get to market).

5. The Google Glass and Snapchat Glass effect. Both of those were market failures that didn’t exceed expectations. So now another “cool company” comes along with something you have to wear on your face. Most consumers will just say “wake me up when these things are a market necessity.” They rightfully will point back to those earlier attempts and say “I’m glad I wasn’t the first.”

6. Too much competition from other things. Let’s say you have $1,000 extra in your pocket. Congratulations, by the way. That already puts you in a pretty rare group of people. But will you put it toward these, or a new Xbox, or a new phone? I’m betting on the new phone. Why? Millions of apps. Lots of use cases. Etc. New and fantastic toys are fun to dream about, but a lot harder to actually choose to buy.

So why am I optimistic?

1. Almost everyone I’ve talked to who has seen Magic Leap, from professors to my friends who have made VR companies, say that Magic Leap pushes the technology way forward and represents a real “leap.”

2. Even if it fails in the marketplace the team has value. Luxotica, for instance, owns almost every sunglass brand (Oakley, Ray Ban, etc) and it will need its own augmented reality glasses to compete with Apple. It will have taken note that Apple, with its watch, tore a big hole in the watch industry and changed that and that’s with a product that really hasn’t gotten many people excited.

3. Those of us who have a HoloLens know that there’s real utility once some of the major problems get solved (which, for me, are weight, weight, weight. Others say viewing angle disturbs them). Magic Leap looks to have solved both, albeit you need a computing pack that you’ll wear on your waist. Either way, though, this is why I’m looking forward to getting one. I love my HoloLens, I just can’t use it very much because it hurts my nose after 45 minutes of use and the optics aren’t very sharp and the viewing angle does keep it from “immersing” you into the content.

4. There is a sizable enterprise market waiting for a great product. Why? Well, for one you get as many screens around you as you want. For two, if you are, say, an architect, you can see your designs in a whole new way than you could on a 2D screen. For three, entertainment will really take off if these sell well. Movie industry is chomping at the bit to build new kinds of movies that you are inside (I saw one at Oculus Story Studio that I wrote about last post). Car designers want these too, and so do many others who work with 3D objects, which is why Magic Leap and Autodesk are working on some projects that I bet we’ll hear more about next year.

Recently I sat down for a long conversation with the founder of Escher Reality, Ross Finman, which claims it has the most advanced augmented reality API.

This was an audio-only recording, so it also gave me a chance to try out the new Descript Podcasting Service that was turned on yesterday.

The 50-minute recording is here.

What you’ll see is that Descript built a text description of the entire interview (I didn’t edit it much so you can see how accurate the AI is there that converted the speech into text).

I won’t try to repeat the 50+ minute conversation here, but if you listen to it you’ll learn a LOT from one of the most technical people I’ve interviewed in my journey through learning about augmented reality.

Let’s focus on my review of Descript. I actually added names to each paragraph but when the file got uploaded to the Web that got stripped out. As you’ll see in the text file the accuracy isn’t all that high, but it’s difficult to be accurate with Ross’ speaking style (or mine).

That said, it worked very quickly and was easy to use. I hope they fix the bugs with uploading fixes to the text but I’m satisfied and it’s better than just having an audio-only file podcast.